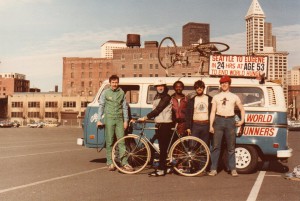 February 6, 1982; the birthdays of Babe Ruth, Ronald Reagan; and this 53 yr old psychologist Gene Smith. Destination: 24 Hr Non-Stop Bike-A-Thon from the Seattle Kingdome, Washington to Eugene Oregon. The Seattle Times, Associated Press and other media were covering the story. 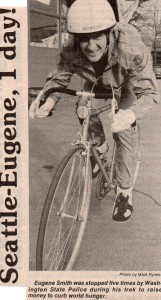 The challenge began at sunset, 14 hrs in the dark, as the strategy recognized that exhaustion would come and be better faced in the daytime. The 22 mph pace was staggering as miles and miles of freeway passed in the night. My thoughts were sobering how nothing really prepared me for this, even the daily prep of cycling 70 milers and running 10 milers.

Finally the sunrise brought renewed focus and daylight forged me on. Suddenly 50 miles out from the ‘finish line’ the biker ‘drafting’ me caught my wheel and I went ‘crashing’ into the pavement in a heap. The ‘pain’ was intense from a broken collar bone and with torn bloodied clothes I pleaded with the crew to put me back on the bike and tie my hands to the handlebars so that I could steer. Against all rules, I insisted, that if people all over the world can go hungry, then I can finish this journey.

Now pieced together and back on the road we all prayed for no red lights coming off the freeway into the city. Radioed in we were met by the Highway Patrol who escorted us all the way into the Valley River Inn, across the red carpet and straight through the FINISH LINE! 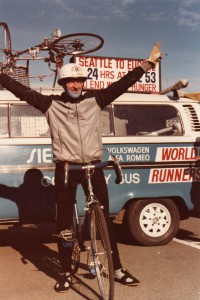 Broken and bleeding I stood up as crowds cheered and the announcement from the loud speakers blared: “Gene Smith has just broken a WORLD RECORD in 22 HRS, not 24! And endured 480 MILES not 300 miles by overcoming detours.

Before medics escorted me to emergency, I kissed my wife and had a press conference. Life and death had touched me but I now knew what starvation & world hunger was. My best friend was that beautiful BLUE BIKE and the JOY OF LIVING.

Extensive pre and post medical testing revealed my chemistries were destroyed. No steroids, No HGH, No testosterones, ONLY THE WILL TO WIN.